The Board That Cried Wolf

It’s an old story but an important one, we call it the board who cried wolf.

This is a true story. Names have been changed to prevent embarrassment. 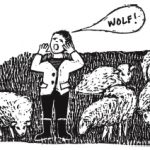 The board of an association hereafter to be know as The Shepard Boy Association, had a problem with an owner that refused to follow the rules and was renting his unit without submitting the required application and/or getting his tenant approved. When management sent him violation letter, he just ignored them. At the recommendation of management, the board agreed to have the association attorney send a letter informing the owner that if he failed to address this issue the association would take legal action. Like the notices from management, this too was ignored. Both the attorney and management recommended that the attorney be permitted to take legal action to force the owner to comply with the rules. The board, however, did not want to spend the money to have the attorney proceed with legal action, and insisted that instead the attorney send an additional letter. This too was ignored.

At this point the board decided that they just did not want to spend the money for the attorney to proceed and dropped the matter. Shortly after the board voting to drop the matter two additional owners rented their units and did not bother going through the required application and approval process. When confronted these owners made it clear to management that since they knew the board was not able or willing to take legal action there was not reason for them spend the time or money to get their tenants approved.

Not only had the board of The Shepard Boy Association, made it clear to all that they would not follow through on their threats, but in the process they lost their right to require application and approval, as to take action against some while failing to follow through on others would be considered selective enforcement.

While the cost of taking legal action when someone refuses to comply with the governing documents may seem, and often is expensive, the cost of failing to follow through on threats of legal action are almost always much more expensive in the long run. At best the board loses creditability. At worst the board and the association can lose the right to enforce its governing documents.